Paying nearly three grand for a toy puppy may sound like a lot, but less so when one considers the long-term costs of raising a real dog.

The smartphone-connected Aibo — that's a play on the words "artificial intelligence robot" — is making a return to the U.S., with the "first litter" of Aibos slated to be released in September, Sony announced on Thursday.

First introduced in 1999 and discontinued in 2006, the Japanese electronics company sold more than 11,000 Aibos in the first three months after the January release in Japan.

The latest iteration uses cloud-connected artificial intelligence that allows Aibo to recognize faces and learn tricks. In addition, the robotic companion develops its own personality through everyday interactions, according to Sony. The robodog's moves include eyes that can follow objects around a room, an ability to take photographs with a voice prompt and reacting to being petted or scratched on the head.

The product was "designed to connect with its owners on an emotional level," Mike Fasulo, president and chief operating officer of Sony Electronics North America, said in a news release. "Aibo's charming personality, dog-like behaviors and ability to intelligently interact with family members help to create a personal bond."

As part of its suggested $2,899 retail price, the pup comes with paw pads, an "aibone," a pink ball and a charging station, which Sony said the robot knows how to get to after playtime.

If that price tag seems high, the cost of owning a small dog with a 15-year life expectancy by one estimate comes to just over $15,000, making Sony's offering a bargain by comparison. And Aibo doesn't need any early-morning walks and the cleanup duties they entail. 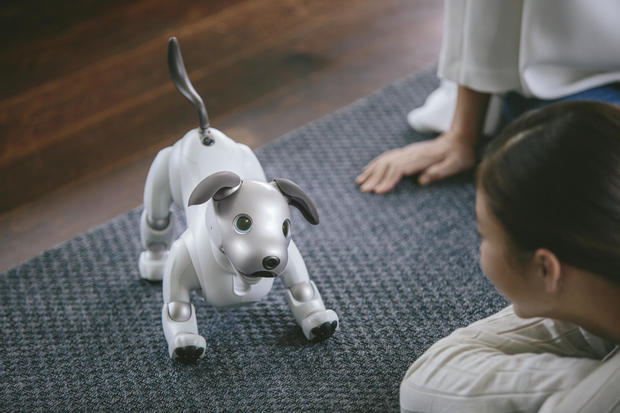