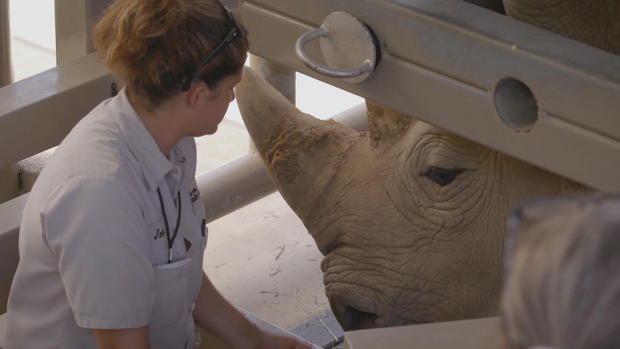 ESCONDIDO, Calif. – A new report from the International Rhino Foundation found three of the world's five rhino species could be lost within our lifetime. Perhaps no species is closer to extinction than the northern white rhino. There are only two left in the world. Scientists at the San Diego Zoo Safari Park are part of an international effort trying to save the species.

At the San Diego Zoo, a southern white rhino named Victoria is pregnant. At 17 weeks, her calf is about the size of small banana, reports CBS News correspondent John Blackstone. It's a big moment for Barbara Durrant, the zoo's director of reproductive sciences.

"This pregnancy is really significant for us because it was the result of artificial insemination. And the sperm we used was frozen. So that's a big hurdle," Durrant said.

There have only been a few rhino births from artificial insemination. Victoria is one of six southern white rhinos taking part in a study of their complex reproductive system, a study to help save from extinction another branch of the white rhino family northern white rhinos.

"We want Victoria to carry this pregnancy to term," Durrant said. "The reason that's important for us and for all the other females at the rhino rescue center, is that they eventually are going to be surrogates or embryo transfer recipients for northern white rhino embryos."
The northern white rhino is on the verge of vanishing forever. In 2015, at the San Diego Zoo Safari Park, we met Nola, an elderly northern white, one of just five left on the planet.

Nola has since died. All five species of rhinos face the same threat: demand on the black market for their horns, which are mistakenly believed to have medicinal properties. In 2017, poachers killed more than 1,109 rhinos. Today only two northern whites remain, a mother and daughter in Kenya, under 24-hour armed guard.

"They were poached to extinction," Durrant said. "We feel it's our responsibility to bring that species back."

Victoria and five other southern white rhinos were relocated to San Diego from South Africa. One arrived with a wound in her side.

"They brought the bomb squad out to come and X-ray her because our X-ray equipment can't shoot through a rhino; they're just too big. They confirmed for us that there were fragments of bullets inside of her," rhino trainer Marco Zeno said.
The hope is that these southern white rhino females will become surrogate mothers for northern white embryos. But creating those embryos depends largely on the Safari Park's Frozen Zoo, the largest gene bank in the world with samples from some 10,000 animals.

Durrant believes assisted reproduction and stem cell research give scientists an opportunity to resurrect the northern whites. A team from the Leibniz Institute in Berlin has been perfecting a procedure to harvest rhino eggs, and hopes to extract eggs from the remaining two northern white females this fall.

Not so long ago, the population of southern white rhinos was also dwindling. Breeding programs have helped their survival. Durrant hopes one day, perhaps years from now, a newborn northern white will bring the promise of a return from extinction.

"It's a very emotional thing for us to see a species become extinct before our very eyes. But we have those cells safe in the frozen zoo. So it gives us hope," Durrant said. 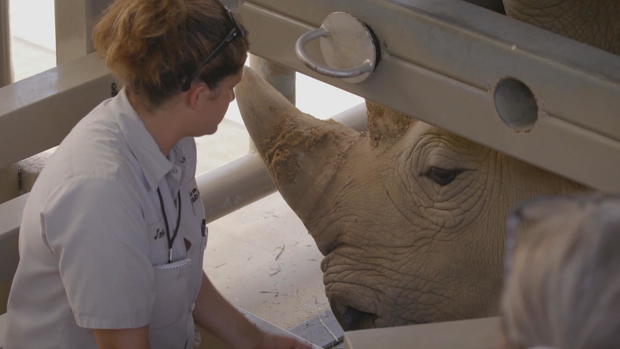 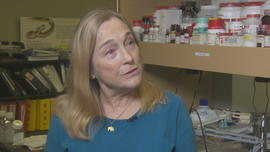 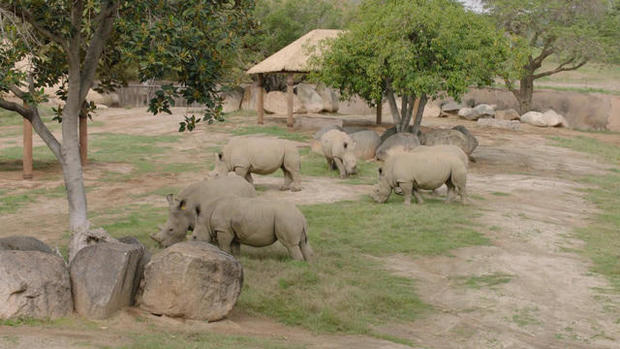