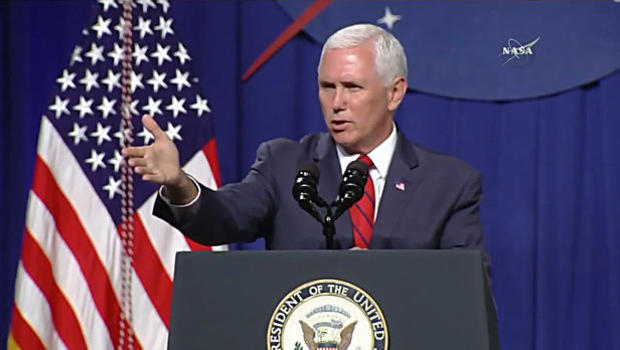 In what came across as a combination pep rally and old-time revival, Vice President Mike Pence urged flight controllers, engineers and astronauts at the Johnson Space Center Thursday to "rededicate" themselves to carrying out the Trump administration's drive to establish a permanent U.S. presence around the moon in the early 2020s before eventual voyages to Mars.

"You here at the Johnson Space Center will guide these journeys," Pence told a packed auditorium at the sprawling Houston facility. "While our sights are once again set on our lunar neighbor, this time we're not content with just leaving behind footprints. The time has come for the United States of America to … establish a permanent presence around and on the moon."

As chairman of the newly reconstituted National Space Council, Pence has been leading a new multi-agency drive to coordinate civil, commercial and military space programs under a unified national space policy. President Trump signed Space Policy Directive 1 last December, calling for NASA to refocus its human space program on returning to the moon.

The agency is developing a new heavy-lift rocket, the Saturn 5-class Space Launch System, to carry Orion capsules to the moon and beyond and soliciting designs from aerospace contractors for a small space station, or "gateway," that will be built in lunar orbit. It is intended to serve as a base for research and a stepping stone for eventual landings and fights into deep space.

At the Johnson Space Center, Pence recalled a scene from the movie "Interstellar" in which a character mused "we used to look up at the sky and wonder at our place in the stars. Now, we just look down and worry about our place in the dirt."

"That's not how Americans think," Pence said. "Truthfully, that kind of thinking led people in the past to even cancel the Constellation program. That would have put Americans back on the moon by 2020 and set the stage for exploration of Mars and beyond. That decision was a mistake."

The Constellation program was promoted by the Bush administration in the wake of the 2003 Columbia shuttle disaster. It called for completing the International Space Station by the end of the decade and building new rockets and spacecraft to carry astronauts back to the moon by the early 2020s for long-duration stays on the surface.

But the Obama administration canceled Constellation after a review determined it was unsustainable at then-current budget levels. Instead, NASA was ordered to focus on missions to nearby asteroids while helping develop a commercial infrastructure in low-Earth orbit.

The decision to cancel Constellation, Pence went on, "said to our country and to the entire world that America was no longer serious about human space exploration."

"But those days are over. America will lead mankind to the stars once again. Our administration has restored the moon as the focal point of our national space activities because we recognize its pivotal importance. … It's not a question of if, it's just a question of when."

The vice president also praised NASA's work with the International Space Station, calling it an "unqualified success." But he reiterated the Trump administration's decision to terminate government funding in 2025 to free up money and to encourage more commercial activity in low-Earth orbit.

He praised the ongoing development of commercial spacecraft being built by Boeing and SpaceX to ferry American astronauts to and from the space station starting next year, ending NASA's sole reliance on Russia for ferry flights to the lab complex.

"Sadly, for more than seven years we've been forced to hitch a ride to space," Pence said. "Many Americans don't know we've actually been forced to pay Russia to carry American astronauts to the International Space Station. Today, that cost runs about $82 million a seat. Those days are about to be over.

"I'm going to make you a promise," he added. "Soon, and very soon, American astronauts will return to space on American rockets launched from American soil! And when they go, they'll be guided by the dedicated team here at the Johnson Space Center."

Pence told the civilian space workers the Trump administration is moving ahead with plans to establish a new branch of the military, the United States Space Force, by 2020. It will be "devoted solely to advancing American security in space."

"The need is real," he said. "China is aggressively weaponizing space. Russia, too, is developing and testing new and dangerous weapons and technologies to counter America's space capabilities. Our administration is committed to keep America ahead of our adversaries in this critical domain."

Finally, Pence recalled the flight of Apollo 8 and the crew's reading from Genesis as they orbited the moon 50 years ago this Christmas Eve. He asked the NASA workers to "rededicate" themselves to the dream of human spaceflight, saying "however deep into the cosmos we may reach, our destiny, mankind's destiny, is not only here on Earth, it is in the heavens as well."

With a now-familiar church-like delivery, Pence called on the NASA workers to "go forth and meet that destiny together and do what Americans have always done, let's seize it with ingenuity and courage, let's seize it with faith. You can be confident the American people have faith in you." 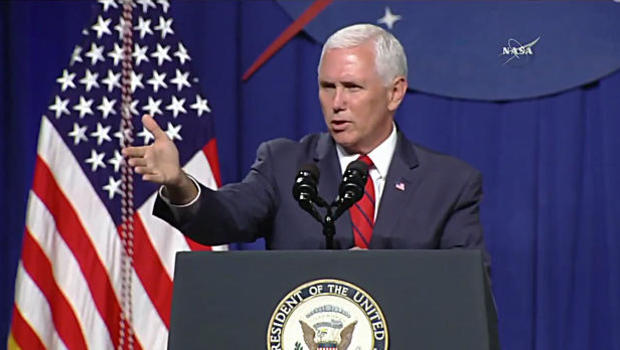 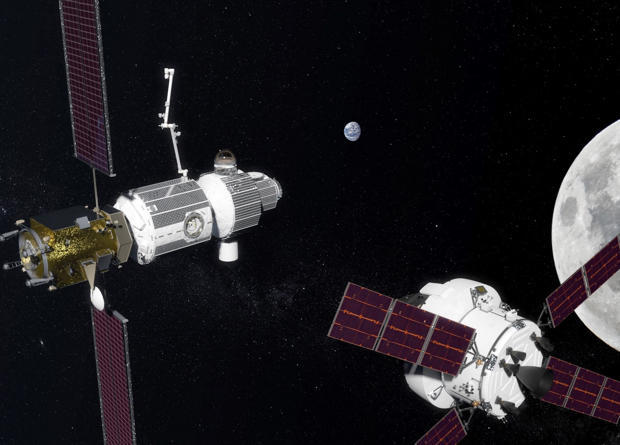 Doctor caught on camera allegedly poisoning her husband with Drano

What you need to know about Medicare Part A's depletion date

After leaving Russia, McDonald's to reopen in Ukraine