By Kate Gibson MoneyWatch August 23, 2018, 5:30 AM Google's tracking follows you more than you know

Trying to avoid detection by Google is pretty much hopeless when you're online because of the search giant's vast abilities to compile data, according to new research.

In addition, even though not using Google's devices or services curbs its data collecting, the prevalence of the company's advertising network makes preventing it from compiling some information an uphill battle, the study published Tuesday found.

"These products are able to collect user data through a variety of techniques that may not be easily graspable by a general user," Schmidt wrote. "A major part of Google's data collection occurs while a user is not directly engaged in any of its products."

Google's means of collecting data involves services including Maps, Hangout chat and YouTube, along with its DoubleClick Ad Network, according to the study, which was sponsored by Digital Content Next, a lobbying group that represents digital publishers.

Two-thirds of the data Google compiled during a 24-hour mock period was not volunteered, Schmidt found. The research also detected evidence of Google having the means to link anonymous information with data from consumers' accounts when they weren't signed in or were in a private browser mode — called "incognito mode" — on the company's Chrome browser.

The findings follow an Associated Press investigation that found turning off the "location history" setting did not halt all location data collecting. 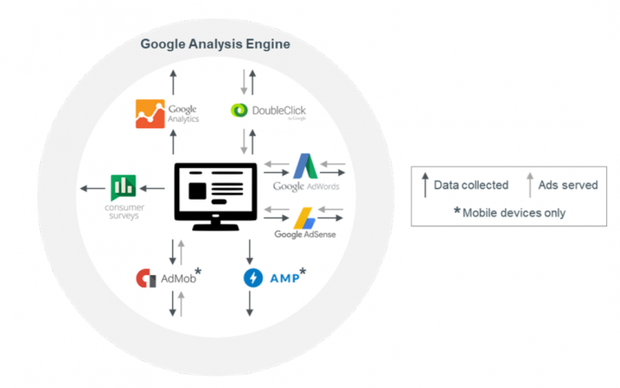