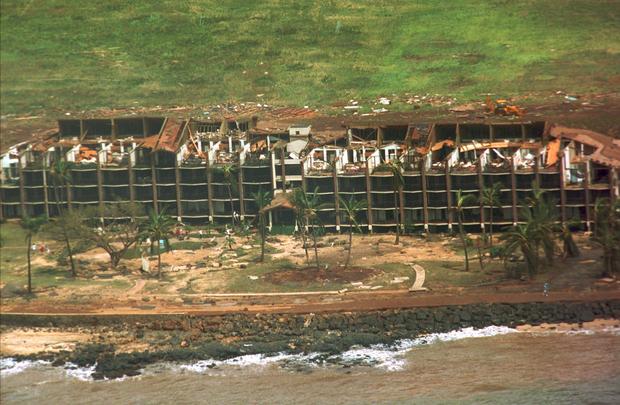 As Hurricane Lane barrels toward Hawaii as a Category 4 storm, longtime residents are recalling the last time a hurricane made a direct hit on the state. In 1992, Hurricane Iniki became the most powerful storm to strike the islands in recorded history, causing billions of dollars in damage and destroying thousands of homes.

Hurricane watches and warnings from the National Weather Service were in effect Wednesday for several of the islands, including the Big Island, Maui and Kauai. Kauai bore the brunt of Iniki in 1992, and that storm is top of mind for residents preparing to weather Lane in the coming days.

Iniki made landfall on Kauai on Sept. 11, 1992, after making a sharp turn to the north-northeast over the course of the previous two days. The storm's path was possible due to a weakened "subtropical ridge," a band of high pressure that typically shields the Hawaiian Islands from tropical storms.

Iniki's unexpected movement meant the Central Pacific Hurricane Center (CPHC) failed to warn Hawaiians until less than 24 hours before it hit, with forecasters incorrectly assuming the system would pass south of the islands. Iniki made landfall on Kauai as a Category 4 storm with sustained winds of 145 mph, becoming just the second hurricane to come ashore on the islands in recorded history.

The storm devastated Kauai, one of the westernmost Hawaiian Islands. Six people died as a result of the storm, and more than 100 were injured, according to a CPHC report on the 1992 hurricane season. It caused approximately $3 billion in damage, with extreme winds completely destroying more than 1,400 homes and damaging nearly 13,000 more. The entire island lost power and telephone service. Only 20 percent of the island would have power restored within a month. It would take years for the island to recover from the damage.

Residents on Kauai who are preparing for Lane vividly remember the destruction caused by Iniki 26 years ago.

"I remember how very little rain fell. But I remember the wind being the strongest force of nature I've ever witnessed and probably the scariest sounds I've ever heard in my life," resident Mike Miranda, who was 12 years old in 1992, told the Associated Press. He said his school held classes in Army tents for months after the storm.

Gray Maguire told The Garden Island, a newspaper in Kauai, that he was boarding up his home and securing items around his yard in preparation.

"I helped out with Hurricane Iniki, I was in the military and came over here when they had the devastation, so I kind of see the after effects of it," he said. "Every time a hurricane coming, everyone's running through preparing. You've got to be prepared and right now if you're not prepared, then you pay heavy dividends in the end." 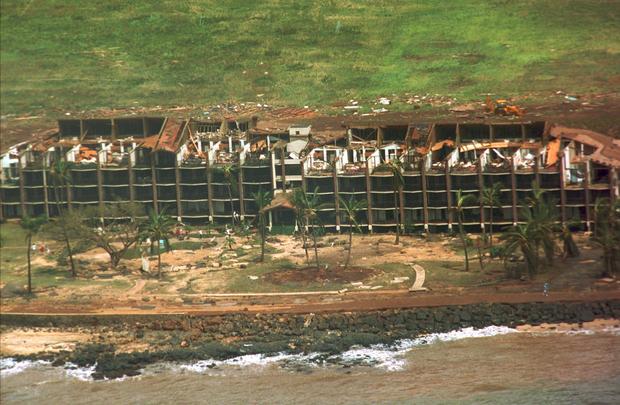