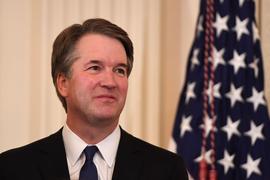 "The President has disgraced his Office, the legal system, and the American people by having sex with a 22-year-old intern and turning her life into a shambles — callous and disgusting behavior that has somehow gotten lost in the shuffle," he wrote in a memo to Starr and the other lawyers involved.

"I have tried hard to bend over backwards and to be fair to him and to think of all reasonable defenses to his pattern of behavior," he wrote in the memo, which was released Monday by the National Archives and Records Administration. "In the end, I am convinced there really are none. The idea of going easy on him at the questioning is thus abhorrent to me."

Fresh off a stint as a Supreme Court clerk, Kavanaugh was hired by Starr to be part of the team investigating Bill Clinton, a job that was supposed to last months but stretched into nearly four years.

Clinton, he argued, in addition to perjuring himself in the Paula Jones case and turning the Secret Service "upside down," "has required the urgent attention of the courts and the Supreme Court for frivolous privilege claims — all to cover up his oral sex from an intern." It was no less, he said, than a "sustained propaganda campaign that would make Nixon blush." And Clinton should have to "account for all of that and to defend his actions," Kavanaugh wrote in bold-faced text.

Kavanaugh proposed 10 questions for Clinton — several of them very graphic — based on what Lewinsky had told the team about her relationship with Clinton. Nine of them began, "If Monica Lewinsky says," and all of them ended with, "would she be lying?"

When Clinton was questioned by the independent counsel, Starr's attorneys did cover much of what Kavanaugh suggested, though their wording was not exactly the same. In response to questions about whether and how he touched Lewinsky, Clinton repeatedly claimed he did not have sexual relations with Lewinsky as he defined it.

In 2009, after he had served a White House counsel and staff secretary in President George W. Bush's administration, Kavanaugh changed his mind about whether sitting presidents should be subjected to lawsuits. He wrote in the Minnesota Law Review that presidents should be able to focus on the many responsibilities before them "with as few distractions as possible." And the president "should be excused from some of the burdens of ordinary citizenship while serving in office."

This was, he acknowledged "not something I necessarily thought in the 1980s or 1990s."

"Like many Americans at that time, I believed that the President should be required to shoulder the same obligations that we all carry," he wrote. "But in retrospect, that seems a mistake."

And he concludes that had President Clinton been freed of the distractions of the Paula Jones sexual harassment case and related criminal investigations, the nation would "certainly" have been better off if he were instead focusing on the threat posed by Osama bin Laden.

Kavanaugh then proposed that Congress might enact a statute that would protect the sitting president from civil lawsuits until his or her term has ended.

Clinton was impeached by the House in December 1998 but acquitted by the Senate.

Kavanaugh's confirmation hearing is scheduled for the week of Labor Day. Senate Majority Leader Mitch McConnell has said he hopes Kavanaugh will be confirmed to replace retired Justice Anthony Kennedy before the new session begins in October. 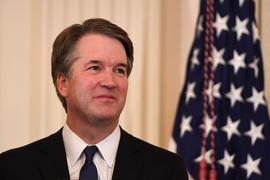