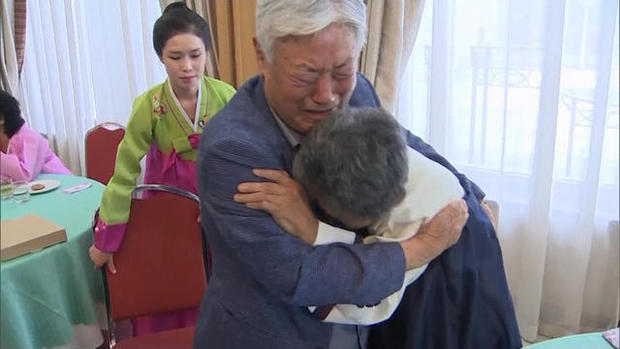 Dozens of South Koreans are in North Korea this week reuniting with family members they've been separated from since the Korean War in the 1950s. The emotional and time-limited reunion is being held at a mountain resort north of the border between the two countries.

It has been three years since the last reunion of divided families took place, and time is running out for many Koreans who are now in their 80s and 90s, reports CBS News correspondent Ben Tracy. They are seeing their long-lost relatives for the first time in decades but know this is also the last time they will meet.

A 92-year-old woman embraced her son, now 71, for the first in 68 years. Like everyone in the room, they were separated during the bloody Korean War which split the peninsula in two in 1953. One 82-year-old from South Korea was reunited with her two sisters, who have both spent their lives in the North.

"I expected my sisters to be dead. But, they are alive and well," Bae Sun-hee said.

A brother and sister could not contain their emotions as they embraced for the first time in decades.

"When he approached from that way over there, this part in his face just looked like our father," Shin Geum-sun, from the North, said.

This week of reunions was one of the main agreements made by South Korean President Moon Jae-in and North Korean leader Kim Jong Un at their April summit. It's been a moment of relative stability on the Korean Peninsula even though there are no signs that North Korea has actually taken steps to abandon its nuclear weapons program.

But for the people in the room, none of that matters. They are here to make up for lost time, learning how their relatives have spent their lives just a few hundred miles away. Many brought photographs of their extended families, even if it was sometimes difficult to recognize each other.

"Even if he's gotten old and has his wrinkles on his face, there is still some of him left in his appearance," Kim Young-sun said after reuniting with his North Korean brother.

There are thousands of other Koreans who have not been picked to participate in one of these reunions. In the South they are selected by lottery, but in the North it's believed people are chosen based on their loyalty to the country's authoritarian regime. 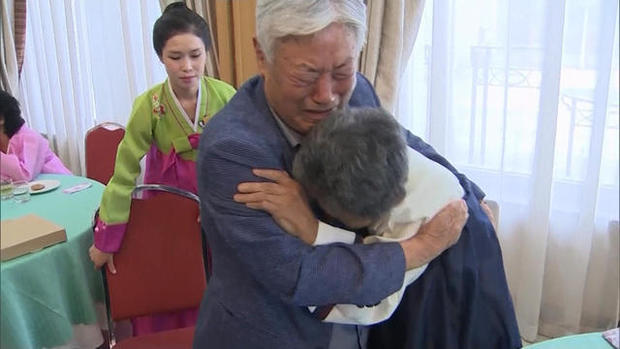 Commemorating 400 years after the Mayflower's arrival