Gina Rodriguez made headlines when she lent her Golden Globes dress to a girl for her high school prom, and then again when she used her Emmy campaign stipend to fund a college scholarship for a young undocumented woman. Now the "Jane the Virgin" actress wants to help even more young women by helping to provide period products for those who don't have access to them.

Rodriguez has teamed up with Always for their #EndPeriodPoverty campaign, which aims to donate 15 million period products to girls in need through Feeding America's school pantry program. She told CBS News that when she heard one in five American girls misses school due to a lack of period protection, she knew she had to do something.

"I was like, 'Hold up.' I read about this around the world and I'm not unaware those problems exist in America, but one in five is outrageous. One in five is so many," she said. "During an age that is a transformative, precious time surrounded by insecurities and vulnerabilities and fear when you're coming into your body, your shape, your womanhood — and to add this. It was heartbreaking. I think education is the one thing that can't be taken away from you."

Rodriguez said that though she grew up in a socioeconomically challenged household, she can't imagine not having access to period products. She also said that her high school religious studies teacher inspired her to pursue her career, and she doesn't want young girls to miss out on an experience like hers.

"He told me about storytelling … that's when I knew I wanted to be who I am today," she explained. "That includes using my platform to talk about issues and to talk about period poverty, which is rarely talked about in our culture."

Rodriguez said she has always felt strongly about watching out for other women, and that sharing her success is very fulfilling. The actress said "we're very proud" of the young woman who received the scholarship.

"She's wonderful. She's going to Princeton and she's brilliant," Rodriguez continued. "You know, when you have something to give and that just happens to be your love language, life feels very full. I didn't get here alone. I don't think I'd want to do this alone, either. Obviously, maybe a lot of my focus is toward young girls and women, but I'm definitely down for the sisterhood, which we need to be, I think. It's very important to protect your sisterhood."

Rodriguez said her altruism and activism run in the family.

"I am just one of a tribe, of a family, of a community of workers and servants," she said. "We are a family of service. My father was a negotiator for Teamsters and I'd go with him to pickets, I'd see him fight for the people, I'd see him negotiate people's situations. My father was always fighting for the underdog, fighting for the voiceless. My mom did the same thing. My middle sister, who's a doctor, worked at Westside Family Health Center doing medical work."

She emphasized that what she's doing isn't "anything to praise" and that she derives great joy from her ability to help others.

Those efforts include increasing Latino representation on screen. Rodriguez penned an op-ed in January decrying the underrepresentation of Latinos in Hollywood, and she said she's trying to change that.

"I have a film coming out in January called 'Miss Bala' that I'm the lead in with Sony," she said. "That's an all Latino cast, a Latino [director of photography], a 95 percent Latino crew and I'm really proud of that. I hope its success will open doors just like 'Crazy Rich Asians' will do, just like 'Black Panther' has done."

Rodriguez said she's filled with "nothing but hope" about solving Hollywood's representation issues.

"'Crazy Rich Asians' makes me feel like the work is paying off and we are seeing the fruits of our labor," she said. "That's a beautiful feeling, so I feel like it's happening — happening all over." 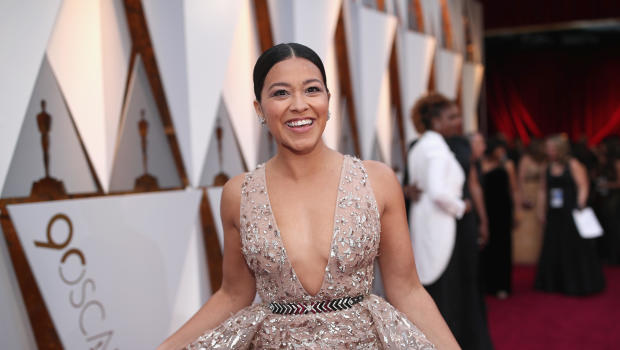