Democrats have a slight edge in the fight for control of the House of Representatives in 2018, bolstered in large part by support from women. In battleground districts that will decide control of the House – most of which are currently held by Republicans – women say they plan to vote for a Democratic candidate by a 12-point margin.

Most of the women in these districts who backed Donald Trump plan to vote for a Republican this time around, but there could potentially be more defection among them compared to Hillary Clinton supporters – a slight difference, but perhaps a meaningful one. Among women who voted for Clinton, 85% plan to vote Democratic this year, while somewhat fewer – 78% – of female Trump voters say they'll vote for Republican. Of those who are not voting Republican, more are undecided about what they'll do than say they'll vote for a Democrat.

In these districts, 42% of white women plan to vote for a Democratic candidate, and 40% favor a Republican. By comparison, in 2016 nationally, white women backed Trump over Clinton, and backed Republican House candidates over Democratic ones by 55% to 43% nationwide.

More than half (55%) of women feel embarrassed about what they've seen in politics this year, and many are angry (48%) and scared (42%), with Democratic women especially likely to feel this way. Democratic women (52%) are more likely than Republican women (44%) to be very enthusiastic about voting this year.

Most women voters don't think President Trump is doing a good job. Asked how he's handling issues that affect women, most disapprove. Democrats do so in in strong numbers. Majorities of independent and moderate women also give the president negative marks on his overall job performance as well as on his handling of issues that impact women.

Most women say the president will be a factor in their vote, with more expressing opposition to him (39%) than support (30%). Men who say Trump is a factor are more inclined to be in support of him. Democratic women in particular say their vote will be against President Trump – more than two-thirds do.

In their evaluations of the president, a majority of women voters – particularly Republicans – say his policies and how he manages the government matter most to them. Democratic women largely judge him on this too, but they are more likely than Republicans to factor in how he handles himself personally and the values and culture he represents.

When considering candidates, a majority of women in these districts say a candidate must share their views on Donald Trump to get their vote. Women who are opponents of Trump may be less willing to compromise on this than supporters. Among women who have negative views of the Trump presidency, 70% say a candidate must share their views on Trump to earn their support. Women who like the way Trump is handling his presidency are more divided. 43% say they could vote for a candidate who disagreed with them on Trump, although most couldn't (57%).

The CBS News 2018 Battleground Tracker is a panel study based on interviews conducted of registered voters in 57 competitive and likely competitive congressional districts in the United States. The poll was conducted by YouGov, an online polling company. This poll was fielded between August 10–16, 2018 with 4,989 respondents. The respondents were selected from YouGov's online panels to be representative of registered voters in these districts in terms of age, race, gender, and education. The sample was weighted according to gender, age, race, and education, based on the American Community Survey, conducted by the U.S. Bureau of the Census, as well as 2016 Presidential vote, and post-stratified on district type. 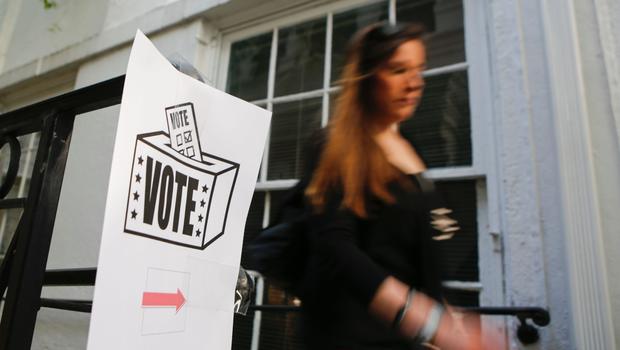 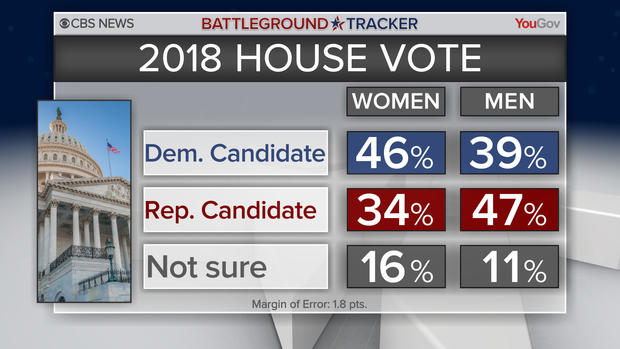 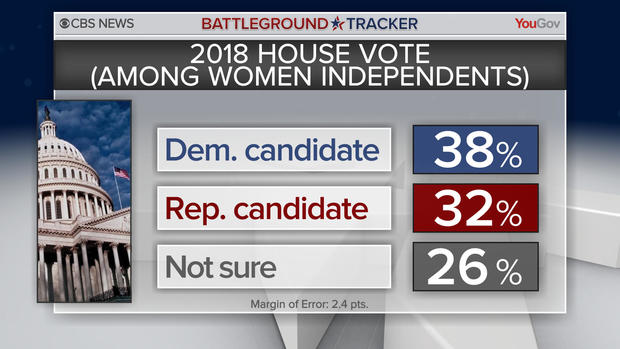 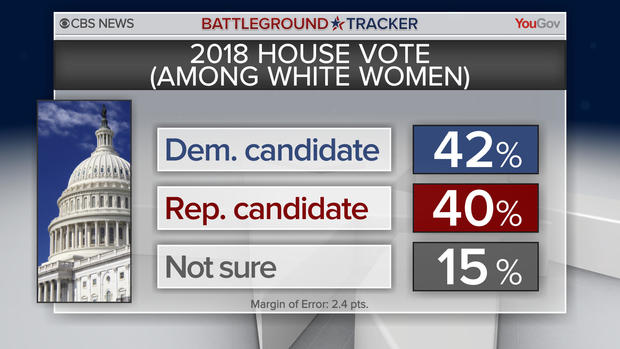 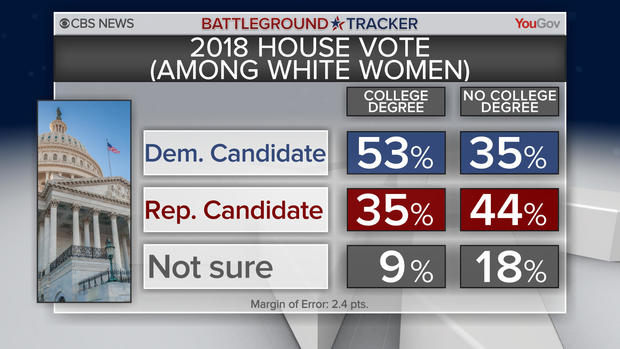 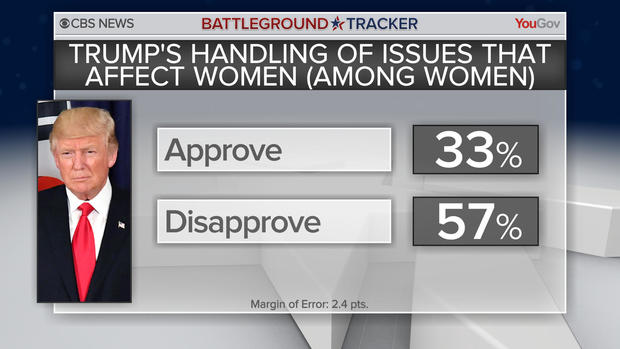 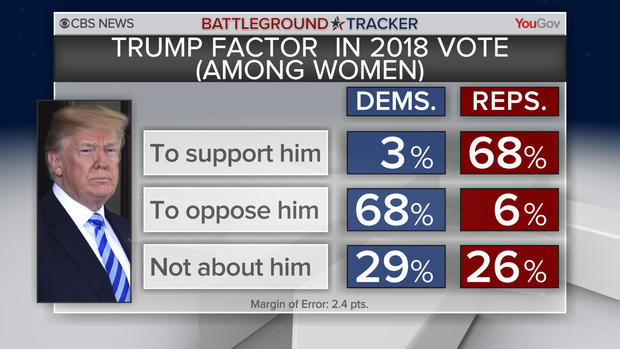 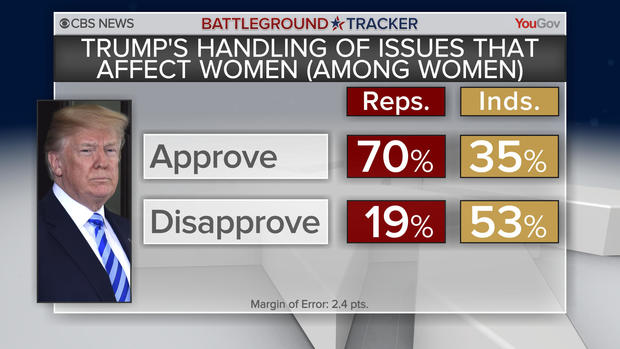