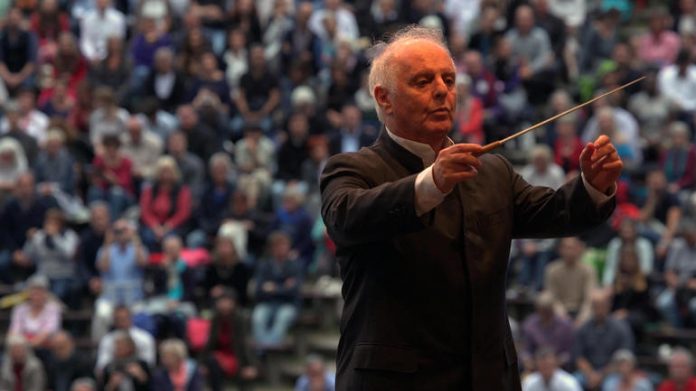 Of all the orchestras he conducts around the world, this may be the one that moves Barenboim the most

You'd be hard-pressed to find a more accomplished musician than Daniel Barenboim, a celebrated conductor and distinguished concert pianist, who grew up in Israel and for the last seven decades, has been performing with the great orchestras of the world. For many maestros, all that would be enough. Not for Barenboim. At 75, he's still at it and he's embarked on a second act: starting his own orchestra for young musicians from Israel and the Muslim world and taking on a subject that's as contentious as it gets the conflict in the Middle East. His work has earned him Palestinian citizenship and charges of treachery from some of his fellow Israelis. But as we first told you this spring, controversy hasn't slowed Barenboim down he seems to thrive on it.

Of all the orchestras Daniel Barenboim leads around the world, this might be the one that moves him the most.

Some of the young musicians on stage at this summer concert in Berlin are Iranian, Syrian, Palestinian.

Others are Israelis, all playing in perfect harmony, even as their governments threaten to destroy one another.

It's called the West-Eastern Divan Orchestra.

Holly Williams: Is it surprising, really, that if you bring very good Arab musicians and very good Israeli musicians together that, that they play together? They make–

Daniel Barenboim: Of course it is

Daniel Barenboim: surprising, because from the education and where they come from, they are taught the other is a monster.

"In the orchestra, we have equality."

It was an idea he hatched twenty years ago with his friend, the late Palestinian scholar Edward Said, to find young musicians from across the Middle East… bringing them together for two months out of the year, and giving them an opportunity to play on the world's most prestigious stages.

Some of the musicians here risk punishment from their governments for performing with Israelis. Others are living in exile. Nadim Husni is a violist from Damascus, Syria. He hasn't been back to see his parents for eight years.

Nadim Husni: Whenever my phone rings you know, I'm every day waiting for some bad news about my parents. I have no idea who's calling and why.

That's because swathes of his country have been leveled in a seven-year civil war, Israel still remains Syria's greatest foreign enemy.

Holly Williams: Had you ever met an Israeli before that?

Nadim Husni: No. No, no, no, never. I had no idea what to expect, how to talk to these people, you understand? They were just foreign creatures.

Coming face to face with the enemy is the whole point of the Divan, but Barenboim has no illusions about what he can accomplish.

Holly Williams: Then why do it?

Daniel Barenboim: Because in the orchestra, we have equality. So when you create a situation in which there is a Palestinian clarinet player, who has a difficult solo. And you have the whole orchestra wishing him well and accompanying him, is the only place where a group that includes so many Israelis wishes the Palestinian well and vice versa.

Holly Williams: Except, of course, the Middle East is not an orchestra. People, there are not musical instruments. They're not even musicians. And there is no conductor there to tell them what to do.

Daniel Barenboim: I know. I know. But this– I am a conductor. I'm not a politician. I'm a conductor. And therefore, I do what I feel I can do.

There's not much Barenboim hasn't done in the seventy years since he made his concert debut as a child prodigy in Argentina. At the age of ten his family moved to Israel and, soon after, he started conducting. He's been classical music royalty ever since.

When 60 Minutes first met Daniel Barenboim 20 years ago, Correspondent Bob Simon found that he was a maestro in perpetual motion.

Bob Simon: I've been following you around for almost a week now… I'm exhausted.

Bob Simon: And anyone who spends a week with Daniel Barenboim will discover that he's not only a musical genius, but a 56-year-old child.

At 75, this older Barenboim is a more sober character than he used to be, more political. He's still giving recitals as a concert pianist and he has his day job, as Music Director of the State Opera in Berlin, but recently he also opened the Barenboim-Said Academy, a conservatory built in this redesigned warehouse in downtown Berlin which, just like his orchestra the Divan, brings together students from Israel and across the Middle East.

Violist Sadra Fayyaz studies at the academy and plays in the Divan. He's from Iran, a sworn enemy of Israel. As a kid, he grew up buying black-market videos of Barenboim's concerts.

Sadra Fayyaz: And then, we watch them until we know every gesture by heart. So we just, when we have them, we are so happy because it's even not in our imagination that someday actually we are going to meet them. We cannot even see them in concert.

Holly Williams: And so, you grew up in Iran–

Sadra Fayyaz: Yes. Sure. We don't even know that he's Israeli. It's all about the music.

They are accomplished young musicians who get to practice and perform in a new concert hall designed by architect Frank Gehry. But the music is only part of what Barenboim wants them to learn here.

Holly Williams: Do they also discuss politics? Do they argue with each other

Holly Williams: Are there also love affairs? Do some of the Israeli players–

Daniel Barenboim: I'm not supposed to know about that–

Holly Williams: I'm sure you do, though. Did– does it happen?

Daniel Barenboim: It must be very exciting to fall in love with the enemy. You should try it maybe one day.

There's chemistry in the rehearsal rooms too. Just listen to this ensemble, that's Sadra the Iranian violist, a Palestinian violinist and an Israeli on clarinet, Miri Saadon.

Holly Williams: What's it like as a musician, as an Israeli musician playing alongside Arab musicians or Iranian musicians?

Miri Saadon: I mean, sometimes I have this moment of, of like, "Oh, my God, we are Palestinian and Iranian and me. And just sometimes I remember that, you know, each of us is from such a different background. But we are actually a lot of things– very similar.

Last summer, Barenboim took us to a fault line in the Middle East conflict, the Palestinian city of Ramallah on the Israeli-occupied West Bank, where he has another musical project. It's just a few miles from Jerusalem, but sealed off behind a long security wall that snakes its way across the Palestinian countryside.

Daniel Barenboim: The occupation is horrific for the Palestinians, but it's not good for Israel.

Those can be provocative words in Israel. But Barenboim goes even further, after years trying to build bridges here, he says the wall only serves to deceive.

Holly Williams: I mean this makes many Israelis feel safe in their own homes.

Holly Williams: So it's a lie?

He's opened a music school in Ramallah which draws kids from cities, towns and villages in the West Bank, many of them wouldn't normally have access to classical music. It's a demanding program, which brings in professional musicians from all over Europe to teach around 100 kids.

Natalie's nine and Sana's 11. They've been studying here for more than two years.

Holly Williams: What's your favorite piece of music to play?

GIRLS: "In the Hall of the Mountain King."

Holly Williams: "In the Hall of the Mountain King."

Holly Williams: What does it make you think of? Does it sound a bit sort of magical like it's from a far away place?

For many of the kids in the Ramallah school, that's exactly where music takes them to a faraway place.

Katia is a 17-year-old Palestinian. She's been studying for ten years and practices three to four hours a day.

Holly Williams: How do you feel when you pick up your violin and start playing?

But not even a conservatory for children is immune to the rancor of this region, especially when someone like Barenboim is involved.

Holly Williams: There are some Palestinians who object to it simply because you are an Israeli.

Daniel Barenboim: Yeah, and they call this normalization

In other words, we Palestinians suffer under Israeli occupation, and therefore we want no contact with Israelis.

Holly Williams: I mean, on the other side there are Israelis who say, "Why are you devoting your time and resources to the Palestinians?"

Daniel Barenboim: But, maybe those Israelis and those Palestinians should get together. I think I have more or less equal proportion of admirers and detractors, both in Israel and in Palestine. So something of what I do must be right.

Perhaps, but when Barenboim accepted Palestinian citizenship ten years ago, some Israelis considered it treachery.

Holly Williams: It sounds as if you quite enjoy angering people.

Holly Williams: You quite enjoy being controversial.

The kids in Ramallah rarely have the opportunity to play for Barenboim in person, some of the younger ones weren't even totally sure who he was.

But Barenboim demanded as much from these minor maestros in the making as he would from any other musician who shares his stage.

For some of the older ones, there was an even bigger opportunity, Barenboim had flown in members of the Divan Orchestra to perform alongside the kids and their teachers.

Parents, grandparents and local dignitaries turned out for a rare event in Ramallah, a classical concert featuring their very own, taking the stage with a legend.

Barenboim couldn't pass up an opportunity to speak his mind.

Daniel Barenboim: Jewish blood runs through my veins and my heart bleeds for the Palestinian cause.

But the night belonged to the kids and to the music. Mozart, which spoke for itself. 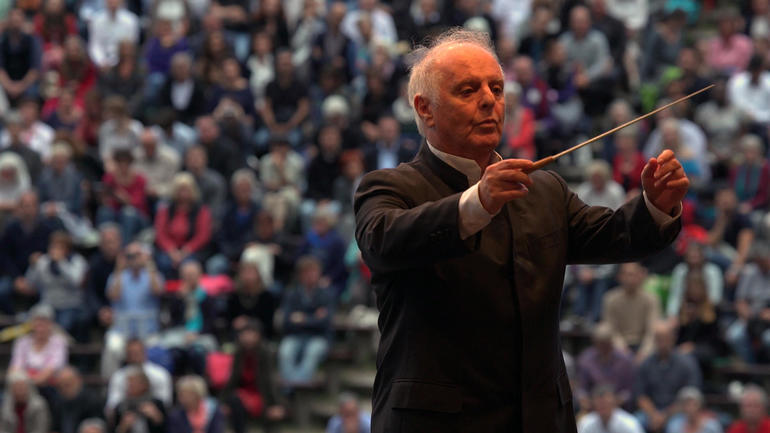 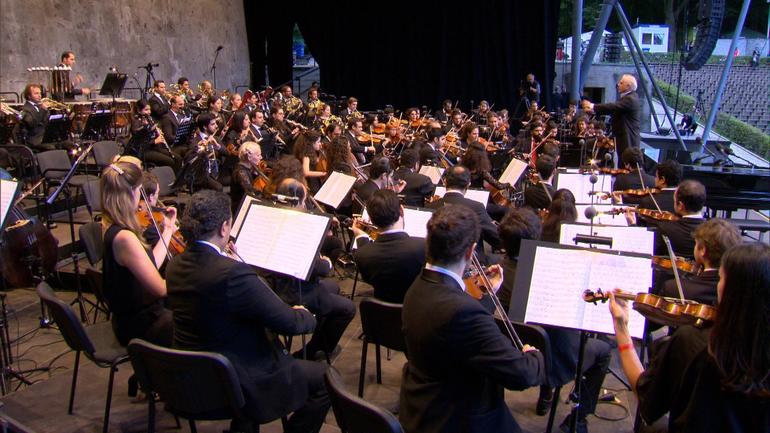 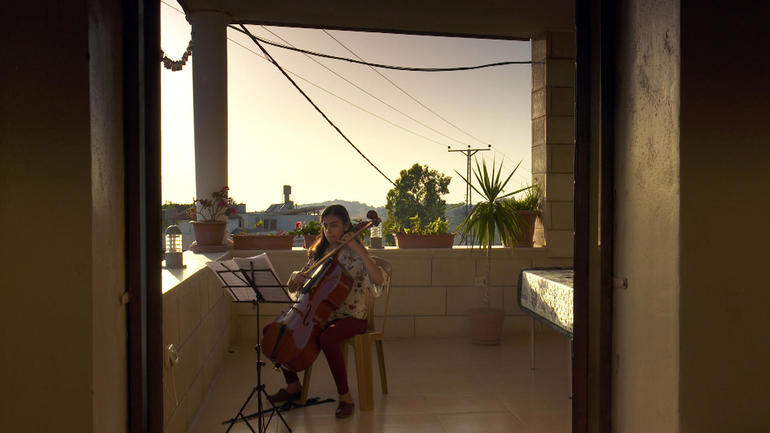 Woman found dead in 1971 identified with help of crowdfunded DNA...

Is AI bot ChatGPT coming for your job?

Louisiana man sentenced to 45 years for trying to kill and...

Chibok survivors of kidnapping by Boko Haram share their stories