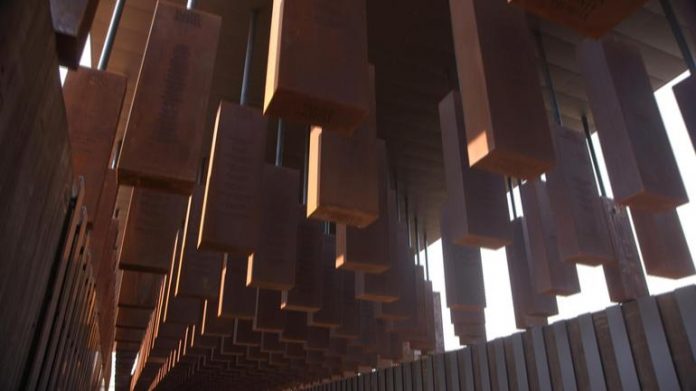 Inside the memorial to victims of lynching

Oprah Winfrey reports on the Alabama memorial dedicated to thousands of African-American men, women and children lynched over a 70-year period following the Civil War

There is a reckoning taking place in America over how we remember our history. Much of the focus has been on whether or not to take down monuments that celebrate the Confederacy. But, as we first reported in April, this story is about a new monument that has gone up in Montgomery, Alabama. It documents the lynchings of thousands of African-American men, women and children during a 70-year period following the Civil War.

The project is led by criminal defense attorney Bryan Stevenson, who is determined to shed light on a dark period in our past that most people would rather forget. It's a shocking and disturbing reality that lynchings were not isolated murders committed only by men in white hoods in the middle of the night. Often, they were public crimes, witnessed, even celebrated, by thousands of people. Stevenson believes if we want to heal racial divisions we must educate Americans – of every color and creed.

These cotton fields in southern Alabama are quiet now, but in 1937 a brutal murder took place here: the lynching of Wes Johnson.

Last January some of Johnson's descendants came here in what has become a ritual taking place at lynching sites across the country, organized by civil rights attorney Bryan Stevenson.

This is 18-year-old Wes Johnson. It is the only known image of him that remains. He was a tenant farmer accused of assaulting a white woman. Before he could stand trial, a mob of one hundred men dragged him from jail, shot him and left him hanging from a tree.

The soil collection is part of Bryan Stevenson's project to document and remember African-Americans lynched during a period of what he calls "racial terror."

So far, Stevenson's team has chronicled more than 4,300 lynchings. They continue to find more.

In nearly every case, no evidence, just an accusation, was enough.

Oprah Winfrey: There are so many crimes committed against African Americans. Why focus on lynching?

Bryan Stevenson: At the end of the Civil War black people are supposed to get the right to vote. And the only way people who were white could maintain their political control was to intimidate black people. And lynching was especially effective because it would allow the whole community to know that we did this to this person. It was intended to send a message that if you try to vote, if you try to advocate for your rights, if you insist on fair wages, if you do anything that complicates white supremacy and white dominance and political power, we will kill you.

Oprah Winfrey: Anything that upsets the power structure as I want it to be.

In 1993 Bryan Stevenson founded an organization he called "the equal justice initiative." It's a legal advocacy group, based in Montgomery, Alabama, focused on defending the poor and powerless. Stevenson is best known for his legal victories in the United States Supreme Court and for successfully overturning the wrongful convictions of over 100 people on death row.

But ten years ago he turned the attention of his organization to also investigating crimes of the past: the lynchings of African-Americans. Defense attorney Sia Sanneh has spent hundreds of hours searching through newspaper archives and visiting county courthouses.

Oprah Winfrey: Is there usually newspaper evidence or documentation?

Sia Sanneh: Often there were public reports, because people acted with impunity. And so there would be newspaper reports, sometimes in advance, saying, "A man will be lynched later this afternoon."

Sia Sanneh: This is an article about the lynching of a man named Jesse Washington, who was accused of a crime in Waco, Texas.

The newspaper headline read: "Burn young negro in public square as 15,000 look on."

A mob dragged Jesse Washington, a teenager who was convicted of murder after a one-hour trial, from the courtroom to the public square.

Sia Sanneh: There's a remarkable photograph of the crowd. And it's people dressed in their Sunday best–

Sia Sanneh: –with their hats on.

Oprah Winfrey: (READING) "His clothing oil-soaked. He is strung to tree. Fire is set under him. And he is dropped into flames as 15,000 people look on."

Sia Sanneh: I think it's incredibly revealing that death was not enough. That it wasn't enough to kill people. People would be killed, and then shot. And then set on fire. And then even, after that, there are cases where the body was dragged to the heart of the black community.

Fear of that kind of mob led Wes Johnsons' relatives to bury him in this unmarked grave.

Walker Howell: Right here is where Wes Johnson is buried. And–

Faye Walker Howell, who is a filmmaker and Wes Johnson's distant cousin, spent decades interviewing relatives who were alive at the time and remembered the lynching.

Walker Howell: They had to bury him in a hurry.

Bryan Stevenson: It wasn't just Wes Johnson who was killed and victimized. It was the entire black community.

Bryan Stevenson: Everybody was feeling fear and panic and menace and trauma the night of this lynching. And for the weeks and months and years after that lynching, it was a community crime. This wasn't done by the Klan, or people who had to wear a mask. This was done by teachers and clergy and law enforcement officers.

Oprah Winfrey: And people you had to deal with every day.

Stevenson's team started their investigation in Alabama, but soon uncovered accounts of mobs murdering African-Americans throughout the southern states, and beyond.

As the cases mounted, Stevenson wanted to do something to commemorate the victims.

So in Montgomery, Alabama, the heart of the deep south – which still has dozens of monuments celebrating the Confederacy – Stevenson's equal justice initiative took on a bold project: they bought six acres of land and started construction on a memorial to the victims of lynching.

Cannon: You can see it a lot better than I thought.

"The National Memorial for Peace and Justice," which was paid for through hundreds of private donations, opened in April.

"I don't think we get to pretend that this stuff didn't happen. I don't think you can just play it off. This is like a disease. You have to treat it."

It contains 805 steel markers: one for each county where lynchings took place. And on each marker, the names.

The markers are suspended to evoke the horror of being strung up and hanged from a tree.

Bryan Stevenson: So you start with them at eye level, and then on this corridor, they begin to rise. And then you get to this corridor, and this is when you begin to confront the scale of all of these lynchings.

Oprah Winfrey: Whoa. This is something.

Bryan Stevenson: Yes, yes. We wanted people to have a sense of just the scale of what this violence, what this terrorism was.

Oprah Winfrey: So, this is over 4,000 that have been documented, but of course, there are more.

Oprah Winfrey: Will we ever even know how many?

Bryan Stevenson: We will never know.

Uneven, rusted steel is meant to echo the many shades and skin tones of those African-Americans lynched.

Oprah Winfrey: Every name has its own story.

Bryan Stevenson: A woman. A woman.

Bryan Stevenson: They were, they were. Sometimes because they were accused of something, and then sometimes women would be lynched if they couldn't find the man they were looking for. They would lynch that man's wife or daughter or child.

Bryan Stevenson: And this was a minister, Reverend T. A. Allen, who began talking to sharecroppers about their rights. And because he was doing that, the plantation owners, the landowners got together and they lynched him. And the proof they used that he was somebody worthy of lynching is that when they found his body he had a piece of paper that talked about sharecropper rights. And the other piece of paper he had in his suit jacket was a note that said, "Every man a king."

Bryan Stevenson: On the side here, what we do is we start to tell stories. We want people to hear and understand what happened to some of these folks.

Oprah Winfrey: Oh my. Robert Morton was lynched for writing a note to a white woman. David Hunter was lynched in Laurens County, South Carolina, for leaving the farm where he worked without permission.

Lynchings became so acceptable onlookers would send picture postcards to friends and family. This card, depicting the horrific image of a burned corpse, casually notes: "this is the barbeque we had last night." Even young children looked on.

Oprah Winfrey: You know, the thing that gets me in so many of the photographs that I've seen is the fact that people treated it like major events.

Oprah Winfrey: I think about who are those people–

Oprah Winfrey: –that are smiling into the camera?

Bryan Stevenson: And I think it's done real psychic damage not just to black people, but to white people, too. Because you can't bring your child to the public square and have your child watch someone be burned to death, be tortured, to have their fingers cut off, to be castrated, to be taunted, to be menaced, to be hanged like that and not expect it to have some consequence, some legacy. And the legacy that I think it's created is this indifference to how we treat people who look different than us. And I think that's tragic. I don't even think that white people in our country are free. I think we're all burdened by this history of racial inequality.

Oprah Winfrey: What about everyone who says, and there are black and white people say it, enough already, of all that. That happened. That's the past. Let's move forward.

Bryan Stevenson: I don't think we get to pretend that this stuff didn't happen. I don't think you can just play it off. This is like a disease. You have to treat it.

To do that, Stevenson says, we need to talk about it. So, along with the memorial, he also opened a museum in Montgomery — designed to teach people more about what he calls, "the ugly parts" of American history. It traces the African-American experience from enslavement to mass incarceration.

Stevenson wants people to understand that lynchings were not just brutal footnotes in history, they reflected a belief in racial differences that reinforced segregation in the 1950s and 60s, and, he says, has resulted in a pattern of unequal justice today.

Bryan Stevenson: And now we live in a landscape where you see young black boys and men being rounded up. One in three black male babies born in this country is expected to go to jail or prison.

Oprah Winfrey: You actually think that slavery and lynchings led to African-Americans being disproportionately represented in the criminal justice system?

Bryan Stevenson: Yes, I do. And I think, actually, it's not a hard thing to understand, you know, I look at–

Oprah Winfrey: I think it is a hard thing to understand for people who think people get locked up, people are locked up because they commit crimes.

Bryan Stevenson: About 13 percent of the people illegally in possession of drugs in this country are black. That's about our proportion of the population. You know what percentage are arrested? That's about 35 percent. That is an echo of this consciousness that doesn't value the lives of these folks.

Equal value for every life is what Bryan Stevenson has spent his life fighting for. So now, soil from the place of Wes Johnson's lynching sits on this shelf in the museum in Montgomery – along with hundreds of others.

This report was originally published on April 8, 2018. 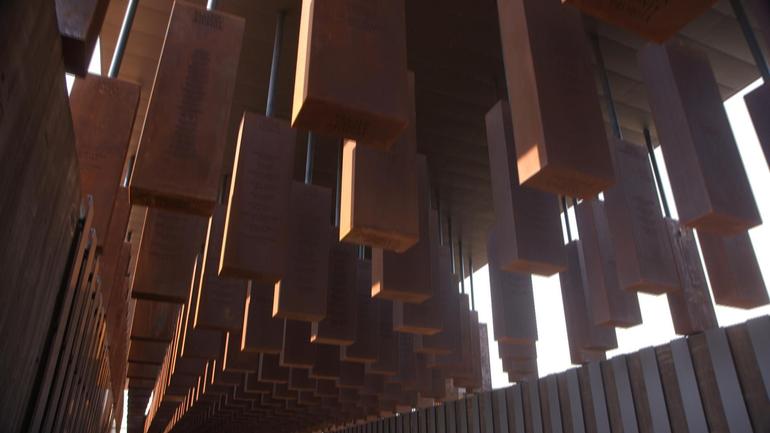 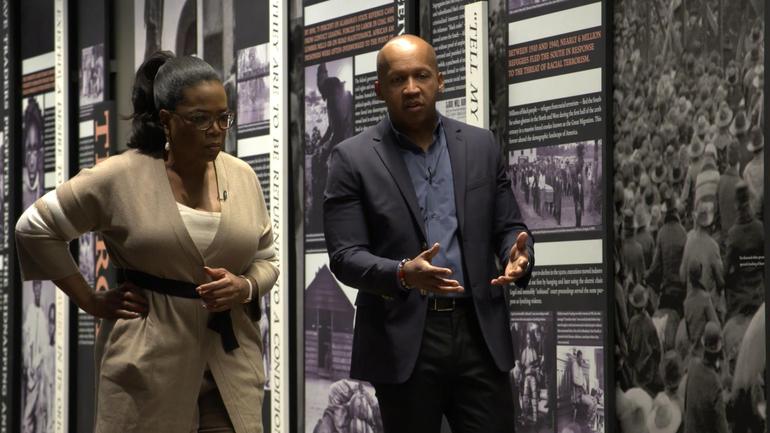 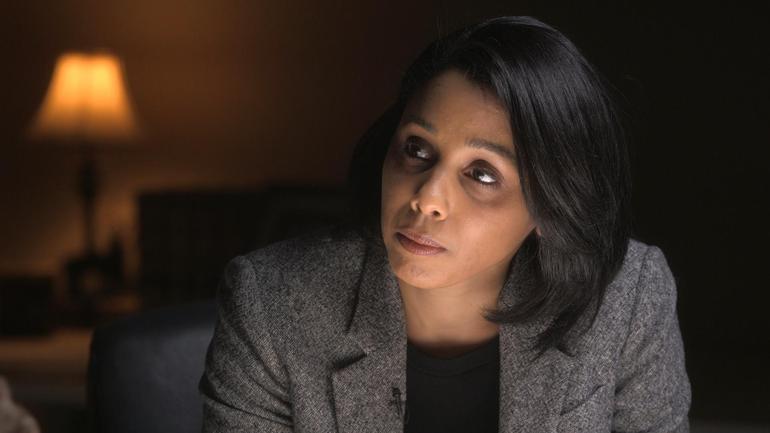 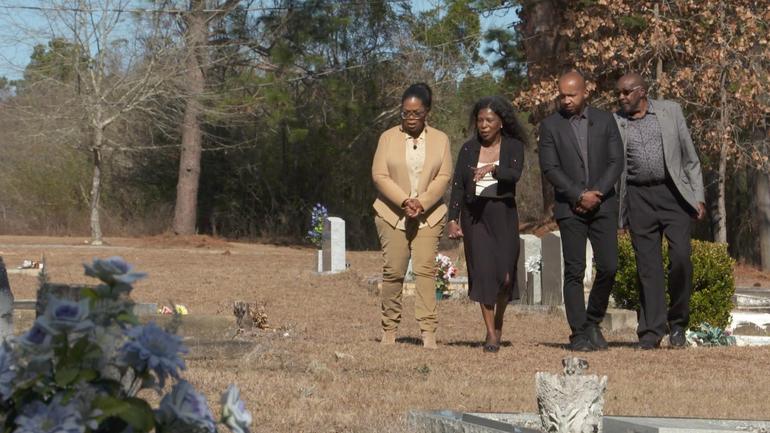 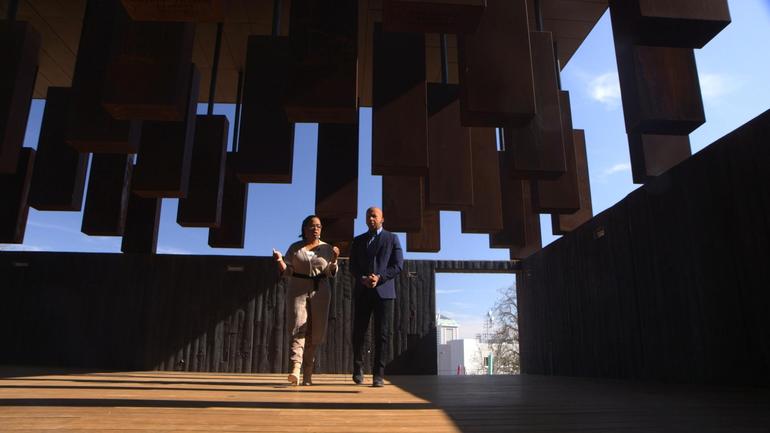