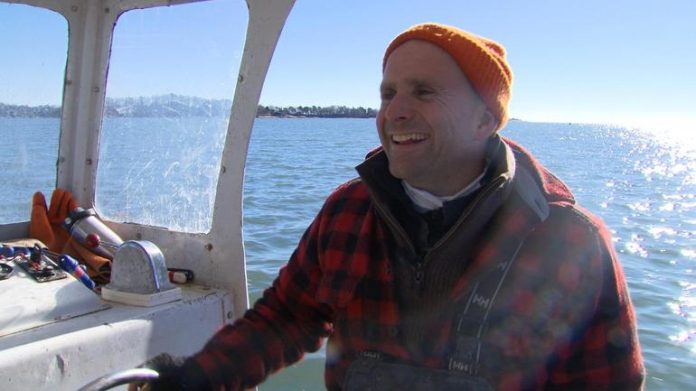 Seaweed farming and its surprising benefits

Seaweed may be thought of as a nuisance, but an increasing number of fishermen, scientists and consumers are seeing it as a solution

Many of us think of seaweed as a nuisance. The slimy, sometimes smelly, stuff that clogs fishermen's nets, gets tangled around our ankles in the ocean, and washes up unwanted on the beach. Even its name — sea-weed — implies something undesirable.

And yet, as we first reported this spring, increasing numbers of fishermen, scientists, and foodies in the country are starting to look at seaweed very differently. As a promising source of food, jobs and help cleaning ocean waters. With rising global populations and limited space to expand agriculture on land, they are turning to the sea — and its "weeds" — as a new frontier.

It's not often you get a ride to visit a farm on a boat. But we were on-board with Bren Smith, the nation's leading advocate for a whole new type of farming — ocean farming. We joined him on a cold day in December, the time of year he heads out to his version of fields to plant his staple crop, a type of seaweed called sugar kelp.

Bren Smith: Here it is.

Lesley Stahl: This is the farm?I can't see anything. (LAUGH)

Bren Smith: The whole idea is it's down under the water. So, see the white buoys?

Bren Smith: That's the edges of the farm.

Lesley Stahl: And the black ones?

Bren Smith: Black buoys are holding up a horizontal rope below the surface. So it's rows– kinda rows of crops. So this is the seed.

He showed us what looked like a tube covered in fuzz.

Lesley Stahl: Is that kelp?

Bren Smith: Yeah, these are the baby plants, they're about two millimeters. And these are gonna– gonna grow to 15, 18 feet by the spring. It's one of the fastest growing plants on earth.

And unlike all those plants that grow in earth, seaweed doesn't need fertilizer, or freshwater. It's what's called a zero-input crop.

Just attach the string it grows on to rope and suspend it eight feet under water.

Lesley Stahl: And that's it, huh?

In five or six months, that fuzz will look like this. This was some of his crop last year. Smith began leasing the right to farm this 20-acre plot of water in 2012 from the state of Connecticut. His was the first commercial seaweed farm in the state. Now there are nine, with a half dozen more in the works.

Bren Smith: We hope you know, in 10, 20 years, there are thousands of farmers doing this. We think it's the future, the time to move out in the ocean and luckily we can do it the right way.

Smith spent most of his life working the oceans in what he now considers the wrong way — on industrial fishing boats, going after lobster, tuna, and cod.

Bren Smith: We were tearing up whole ecosystems with our trawls, fishing in illegal waters,and just really chasing fewer and fewer fish further and further out to sea.

Lesley Stahl: And you didn't think about–

Lesley Stahl: –the idea that you were depleting the population of fish?

But that life was increasingly in peril. Cod stocks crashed due to overfishing, and after Smith reinvented himself cultivating oysters in Long Island Sound, Hurricanes Irene and Sandy hit, destroying his crop two years in a row.

Dr. Charlie Yarish: Bren was really on the verge of bankruptcy.

Searching for a new career on the water, he sought advice from Charlie Yarish, a professor of marine biology whose lab at the University of Connecticut studies some of the thousands of different types of seaweeds.

Dr. Charlie Yarish: But there's only 20 globally that are actually farmed.

Lesley Stahl: They're not all edible?

Dr. Charlie Yarish: No, they're not all edible. Some of 'em actually are quite toxic.

It was Yarish who suggested Smith consider sugar kelp, a local seaweed that gets planted after hurricane season is over, has a mild taste, and can also be used as animal feed and fertilizer.

Lesley Stahl: Seaweed for you, was the lightbulb?

Bren Smith: We can create jobs here. We– we can protect and improve the environment. We don't have to make this choice–

Smith now operates one of the largest seaweed hatcheries in the country, with tanks full of developing kelp spores, and a processing room that comes alive in spring when he and his team bring in the harvest and get it ready for sale. Blanched in 170-degree water, kelp turns a vivid green and can then be sold fresh or frozen, sometimes in the form of noodles. Smith's customers include Google for their cafeteria, Yale University, and several restaurants and wholesalers. He has sold out the last four years.

How seaweed can save the environment

But at this kelp farm across the country in the waters outside Seattle, producing food is almost beside the point. This is a test farm, where Betsy Peabody of the Puget Sound Restoration Fund and a team of scientists are doing an experiment to see whether seaweed can help fight the growing problem of ocean acidification — caused mainly by increasing carbon dioxide levels in the seas.

Betsy Peabody: Roughly 25% of CO2 in the atmosphere is being absorbed into oceans.

Lesley Stahl: And that is what we're getting from fossil fuels?

Betsy Peabody: From both carbon emissions, from deforestation, and I think initially people thought, "Well, thank goodness the oceans are taking up some of that carbon dioxide." But then, scientists started to document that, in fact, when that carbon dioxide goes into the ocean, it causes chemical changes.

Changes like increasing the water's acidity, as documented in the U.S. government's 2017 climate science special report. The excess CO2 causes "a decrease of carbonate ions… Which many marine species use to build their shells and skeletons." Worldwide, "ocean surface waters have become 30% more acidic over the last 150 years." And in the Pacific Northwest, the problem is compounded by currents that bring more carbon-rich waters to the surface. And that's where seaweed comes in.

Dr. Charlie Yarish: Kelp take up carbon dioxide like any plant does, and it just so happens it lives in the water. There are winners and losers in ocean acidification. Organisms that produce carbonate shells like shellfish, they're a loser. They can't handle the lower PH. They can't deposit as much calcium in their shells. On the other hand, when seaweeds like kelp, they actually pick up that carbon dioxide because now it's easier for them to do photosynthesis.

Lesley Stahl: So basically what you're doing is the equivalent of planting trees in the ocean?

And then testing to see how much of a difference it makes.

They're measuring how water changes as it flows through the kelp field, and seeing if baby shellfish grown with the kelp do better at building their shells. Results won't be in for more than a year, and Bren Smith is eager to see them. He's been growing shellfish on his kelp farm too — but not, he admits, because of the science. He says, it's good business. In November, he and his team loaded thousands of baby mussels into netting that looked like massive sausages, then suspended them from ropes that hang down below the kelp. He calls it 3D ocean farming.

Bren Smith: We call it that because we're using the entire water column. And if you can stack crops on top of each other it's just really efficient. You don't use large, you know, plots of ocean. But you get so much food.

Lesley Stahl: So you've got your seaweed.

Bren Smith: Yup. You've got the kelp here. And then we have the mussels.

Bren Smith: Off those same lines we have scallops. And then below the whole system we have cages with oysters in them.

He brought up one of those oyster cages from the bottom to show us.

Lesley Stahl: What kind are these?

And he hauled up a mussel line so we could see their progress too.

Lesley Stahl: They're in bunches.

Bren Smith: These are about mid-size. So they'll double in size and we'll harvest these just about the same time we harvest our kelp. So this is gonna be a big harvest.

"The oceans are a blank slate. For my generation, this is a really exciting moment."

Bren Smith: I'm a farmer now. Whether I like it or not (LAUGH) I'm an ocean farmer. And I talk to fishermen about this. I say, "Listen. We have to make this transition, that heartbreaking move from being a hunter to a farmer. But what else are the pieces of what it is– sorta to be a fisherman? It's to own your own boat, succeed and fail on your own terms, and have the pride of feeding our country. We get to keep those things.

He's so convinced, he's launched a non-profit called Greenwave to encourage others to follow his lead. Husband and wife Jay Douglass and Suzie Flores are among his seaweed-farming disciples. A former marine who served in Afghanistan and Iraq, Douglass learned the ropes, literally, on Smith's farm last spring, spent a year getting a permit for his own plot of ocean in Connecticut, and built 36 anchors from scratch. The day he and Flores went out to plant their first crop, Smith was along for guidance.

His non-profit provides free seed, and guarantees to buy 80% of their harvest for the first two years. He estimates that with a $10-thousand to $20-thousand investment and a boat, new farmers can turn a small profit the first year, rising to well over $100-thousand later on.

Lesley Stahl: Has anyone actually said, "You know, you guys are a little nuts"?

Jay Douglass: People just– ya know, kinda scratch their heads and say, "What do– what are you makin' all these anchors for?" And it's just, like, "I'm startin' a kelp farm," you know. (LAUGH)

Lesley Stahl: "What the hell is kelp?"

Which raises a question for this whole endeavor, will Americans in large numbers start eating seaweed?

Barton Seaver: Just toss some in there, a little kelp.

Lesley Stahl: When I hear the word "Seaweed," the last thing in my head is, "I wanna eat that." (LAUGH) You think they'll buy it out there?

Barton Seaver: I do. (LAUGH) I think, you know, ten years ago, kale wasn't on the shelf.

He says first off, the name "seaweed's" gotta go. He prefers "sea greens."

Lesley Stahl: So, is this one of the dishes you created?

Barton Seaver: This is an Italian dish that typically uses spinach.

He suggests integrating seaweed — pardon, sea greens — into things we already know and like.

Barton Seaver: In front of all of America? No! Not at all.

Surprisingly it didn't taste fishy or seaweed-y. And he says kelp is rich in calcium, fiber, iron, and anti-oxidants.

Bren Smith: I mean, this is what's exciting about this space. The oceans are a blank slate. For my generation this is a really exciting moment– I can farm and grow food, but also I can soak up carbon and nitrogen while creating jobs, while giving people the opportunity to create small businesses.

And while fulfilling his dream of living his life on the water.

Bren Smith: Yeah. I wanna die on my boat one day. That's sort of the goal. And I think if I look over my life, my goal is just always, "How do I keep working at sea?" 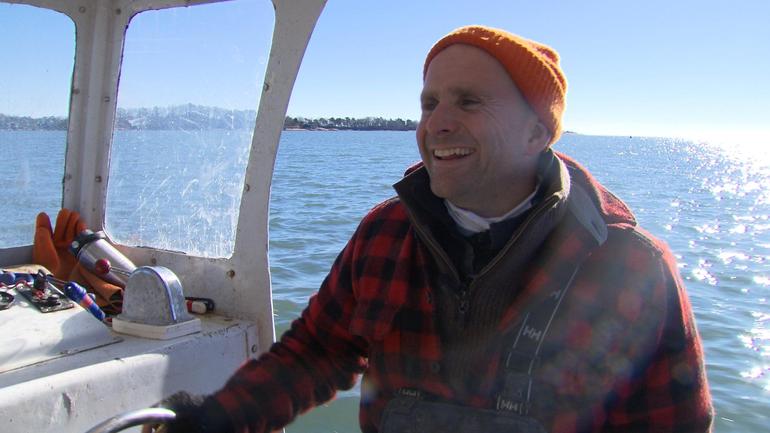 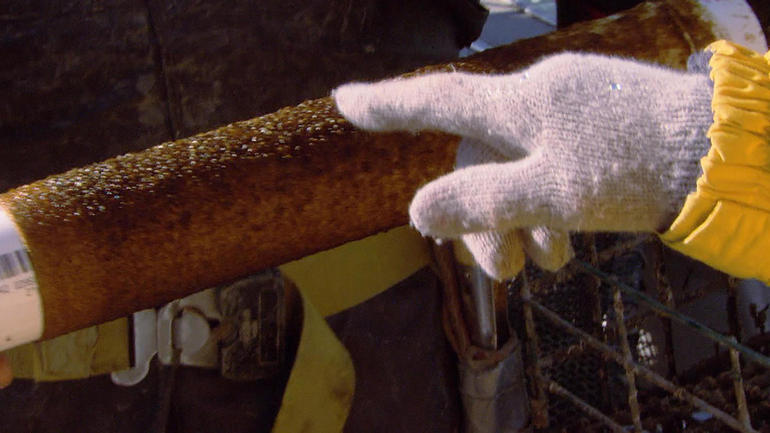 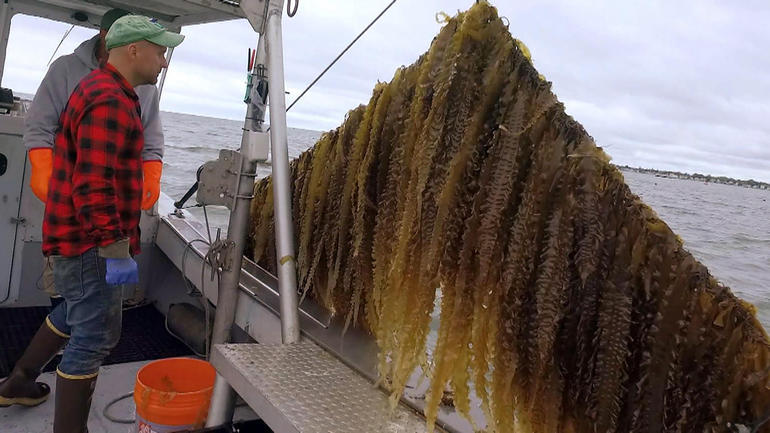 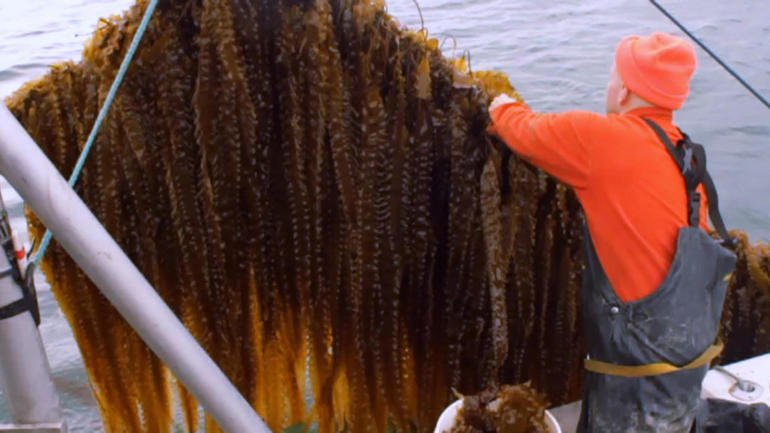 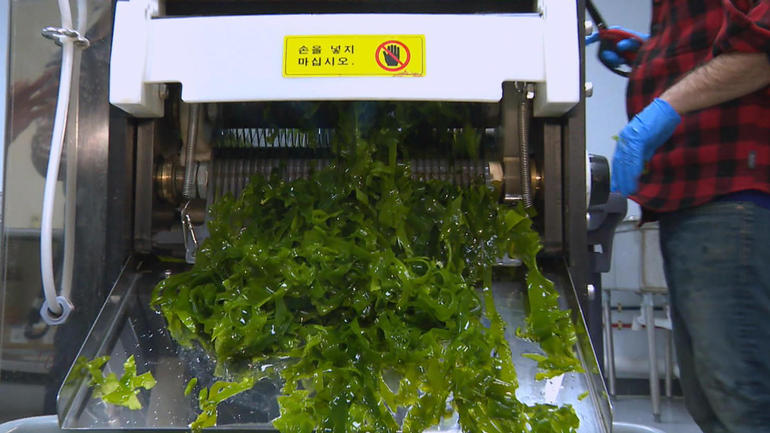