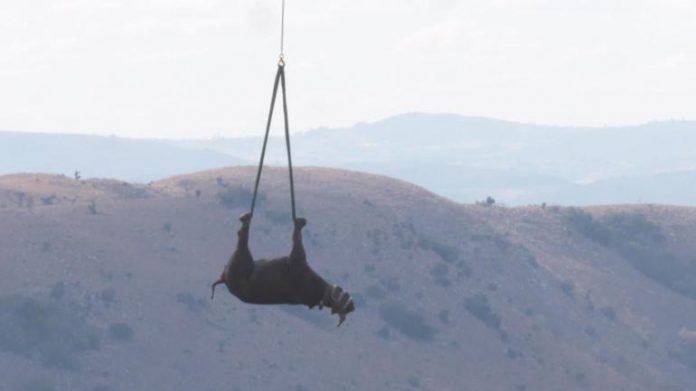 How do you save a prehistoric looking animal that's ornery, exotic and weighs around a ton?

Especially when it lives in places that are hard to get to. That the rhinoceros is in trouble is not a new story. For years, they've been crowded out of their habitats, and hunted for their distinctive horns. In the last ten years, the poaching has gotten so bad in South Africa where most of them live, that the rhino there are under almost daily attack.

As we first told you last December, a team of veterinarians, pilots and game capture specialists are trying a different way to help the most endangered type of South African rhino, the blackrhino. Their solution seems to defy the laws of gravity, and when we heard about it, we had to see it for ourselves.

Take one 1,400 pound black rhino who's been darted and sedated …

Jacques Flamand: A young female. Probably about 6 or 7 years old.

Jacques Flamand: So now we're putting these straps on the feet.

A 52-year-old Huey helicopter and its pilot …

Dave Cooper: Keep an eye on that chain. I'm always worried about it swinging into someone's face.

And you get this …

Lara Logan: Wow. Look at that.

Jacques Flamand: Amazing isn't it? Yeah, I never tire of seeing it.

This feat of engineering, aerodynamics and conservation has been choreographed by Jacques Flamand, a veterinarian who's moving these rhino to save them.

Lara Logan: Why did you start flying the rhinos — transporting them by helicopter instead of by road or other means?

Jacques Flamand: Some of these rhino are in very inaccessible parts of the reserve. And this method of airlifting them provided us with an opportunity. I immediately thought that this is the solution to our problem, getting 'em out of rugged mountainous or thick forested areas where vehicles cannot go in.

With more than a hundred square miles of mountains and ravines, the Ithala Game Reserve fits that description. When we joined Flamand and his team, they were searching the impossible terrain for three rhino they'd selected for relocation. Part of his plan to protect them from poachers and increase their numbers.

Lara Logan: Why did you choose the black rhino to focus on?

Jacques Flamand: Well, I didn't choose it. It chose itself because it's in trouble.

Lara Logan: So how many black rhino were there in the country when you began?

Jacques Flamand: There were about two and a half thousand black rhino in South Africa when we started the project.

That was 15 years ago. The black rhino was a critically endangered species. To get the numbers up, Flamand started the Black Rhino Range Expansion Project with the help of the World Wildlife Fund . The idea was to take a small number of rhino from government parks and settle them in new places, mostly on private land, where they would breed and create new populations.

Lara Logan: So you got the word out to people.

Jacques Flamand: We got the word out that we were looking for land for black rhino. And well, it's worked — amazingly. So those 20 black rhino or however many get put all together onto a new block of land and are left to breed. And we wanted to put 20 because that's a genetically viable number.

Flamand's team captured the rhino by darting them, then driving trucks in to pick them up.

But when they ran out of road, they turned to the skies.

Lara Logan: I mean, it's spectacular and unbelievable and also slightly distressing at the same time. It's sort of everything?

Dave Cooper: You really have to put your mind at rest that, that animal physiologically is not being harmed in any way.

Dave Cooper has been the chief veterinarian for KwaZulu Natal Parks for 22 years. He says the rhino are usually in the air for less than ten minutes and fully sedated the entire time.

Dave Cooper: It looks as if the animal's really uncomfortable. But we've done our homework. We didn't just do this and see if it was gonna work. We hung rhino upside down with cranes and sat and monitored their vitals on top of this sophisticated kind of equipment.

Lara Logan: Didn't you volunteer to hang yourself upside down from the helicopter?

Dave Cooper: I did. But the pilots wouldn't let me.

Tosh Ross: We've had some of the vets want to be hung upside down and try — they have told me that anything that can walk on its feet can hang by its feet.

Pilot Tosh Ross and Dave Cooper have been working together from the beginning. Ross told us the Huey helicopter he's flying for this can haul two tons, more than enough to lift a black rhino.

Lara Logan: So almost 200 and you've lost none.

Tosh Ross: Yeah if we do three today that'll be 200 yeah.

Lara Logan: So you don't hurt the animal?

Tosh Ross: Yeah if it was so easy, everyone would be doing it.

We saw just how difficult it can be as Tosh Ross struggled to land the first rhino. He got it down safe and unhurt — on the second try.

Vet Dave Cooper was already up in another, smaller helicopter looking for the next rhino.

He prepped darts for his tranquilizer gun with a dose strong enough to knock the animal out for 30 minutes.

They tracked the rhino til it dropped. We were right behind them in the Huey with Jacques Flamand and the game capture team.

Lara Logan: I see the rhino down. How many minutes do you have now to get that rhino?

Tosh Ross: We've got a bit of time.

As soon as we landed, it was a race to get to the sedated animal. Dave Cooper's priority — removing the tranquilizer dart and treating the wound with an antibiotic.

Dave Cooper: I darted him once here.

Dave Cooper: The dart just went in and out and I immediately had to put another one in.

Lara Logan: So that's the first thing you do is cover the eyes?

Jacques Flamand: Yeah, that's right because that stops them.

Lara Logan: So is this a male or female?

Jacques Flamand: No, this is a male.

He's young and has many years of breeding ahead of him — exactly what they need. They ID'd him from notches in his ears; most rhino in the KwaZulu Natal Parks are marked this way.

Lara Logan: Is that him breathing? Wow.

The game capture team cleared a path to above.

Jacques Flamand: The helicopter now is going to come and we are going to hitch up those four straps to the central hook.

Tosh Ross maneuvered in the chain and swept the rhino away. It took them less than 16 minutes.

For Dave Cooper, it's a small victory every time.

Dave Cooper: I had tears in my eyes …

Dave Cooper: They mean a lot to me.

Lara Logan: As a vet, I mean, you're the one that gets called out when the poachers have been there and they've hacked up the horn and the animal's bleeding. Is that very difficult for you?

Dave Cooper: Yes. There's been so much negativity around rhino at the moment with all the poaching. And to be involved in something like this is what lifts you and keeps you positive about things.

This is what Cooper and Flamand are seeing more and more. When the program started in 2003, three or four black rhino were being killed a year.

Jacques Flamand: Now we're into the hundreds for this province alone this year.

Lara Logan: So, why is that?

Jacques Flamand: Well, because, there is that stupid demand for rhino horn, which has absolutely no medicinal value, sadly.

Rhino horn is made of keratin, the same substance as human fingernails. Yet in countries like China and Vietnam, people believe it can cure hangovers and increase virility.

Private game parks are drowning in security costs. Most remove the horns to deter poachers. But it's worth so much, more per ounce than gold or cocaine, that every place there's rhino is a target.

Jacques Flamand: And some people have even got rid of their rhinos because they've become a liability on their own properties.

Lara Logan: And a financial burden.

Jacques Flamand: A very huge financial burden. But we still, fortunately, have some very committed passionate people who want to get more black rhino.

That commitment is shared by the game capture team. Vusi Ntshangase told us the poachers threaten their lives and their livelihood.

Vusi Ntshangase: We feed our children with this job. If rhinos– will never here–

Lara Logan: Then you would have no job?

Lara Logan: So these animals mean alot to you?

Vusi Ntshangase: It's important to us. To our lives. So important.

Moving the rhino this way is expensive.

With Tosh Ross volunteering his services, it still costs about $100,000 to lift twenty rhino.

Jeff Cook: "You have to come in over the trucks"

Jacques Flamand joined his team at the landing zone, where they were preparing for their final delivery.

Tosh Ross eased his cargo down…

The next part — the dehorning — was hard to watch.

Lara Logan: I know you do it to save the rhino but it still seems, like, horrible.

Jacques Flamand: It's painless. There's no nerve endings or blood supply to the horn directly.

Jacques Flamand: They do to defend themselves. But it's a toss-up. You know, it's predators versus poachers. Who do we protect them from most? Poachers at the moment, I'd say.

After some prodding, the groggy female was loaded into a crate. She still had a road trip ahead of her to a holding area. Flamand will keep her there until he's captured enough rhino to relocate as a group.

Jacques Flamand: It's great, it's great. I mean one always feels sad removing them from their existing homes but it's for a good cause. It is to start a new breeding population.

Eight weeks later, they were released. For security, we can't tell you exactly where but it's a well-guarded reserve in another part of the country.

Jacques Flamand said there are now about 200 more black rhino in South Africa than when he started his program.

Not as many as he wanted, but at a time of relentless poaching, there's no simple road to success.

Here's one sign of success we can report on since our story first aired.

This baby, you can see it through the bush, standing next to its mother. It was born into that newly transplanted group of black rhino. 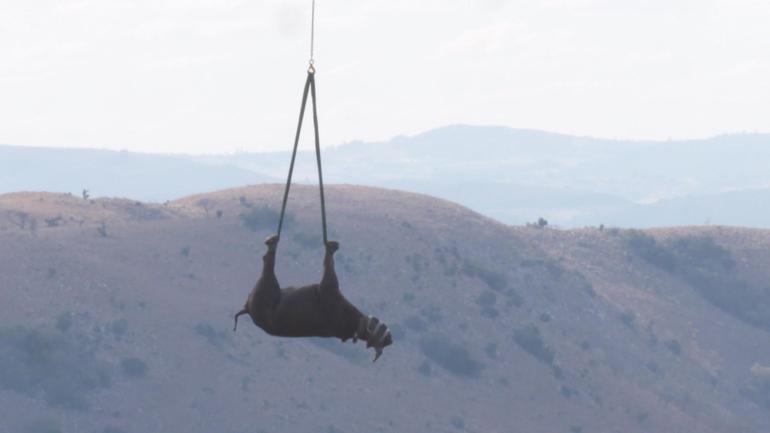 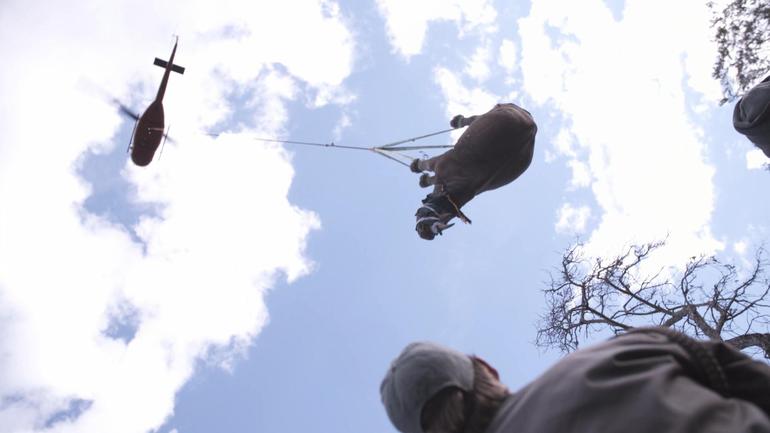 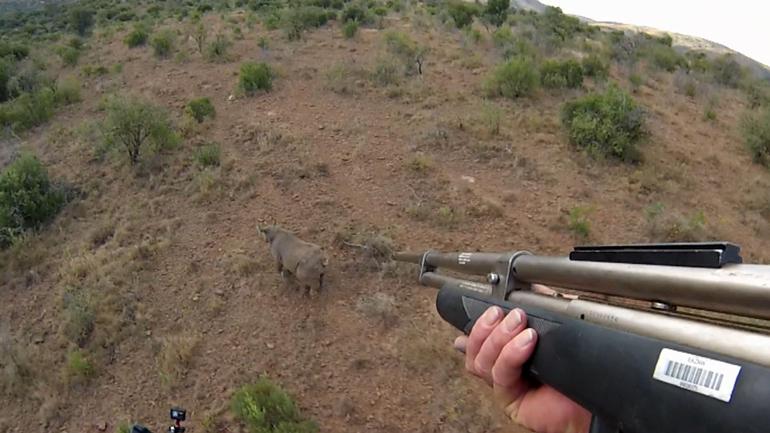 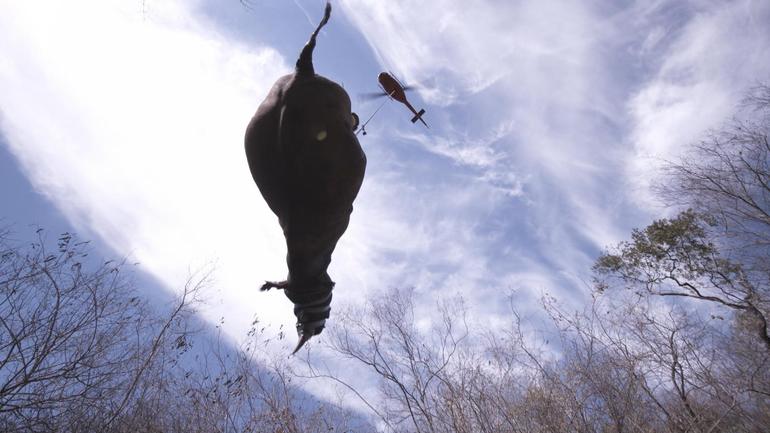 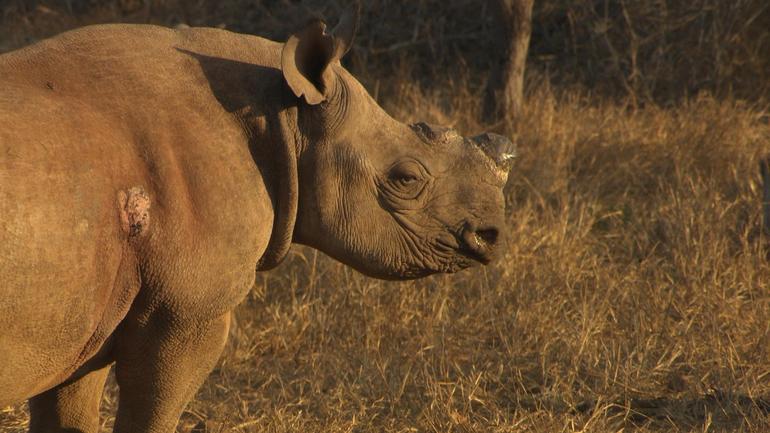 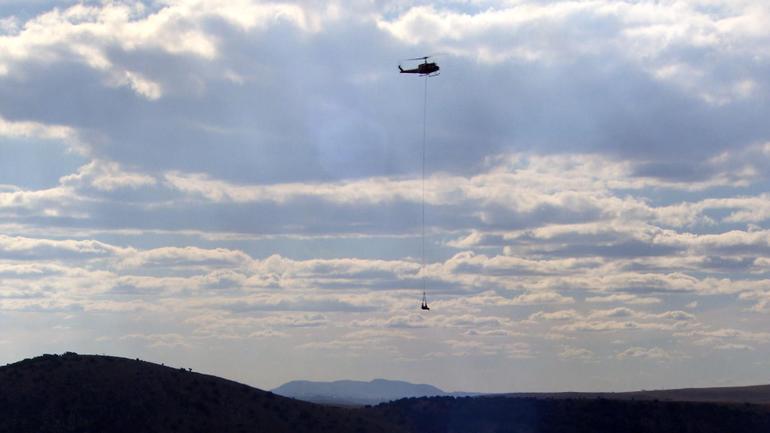 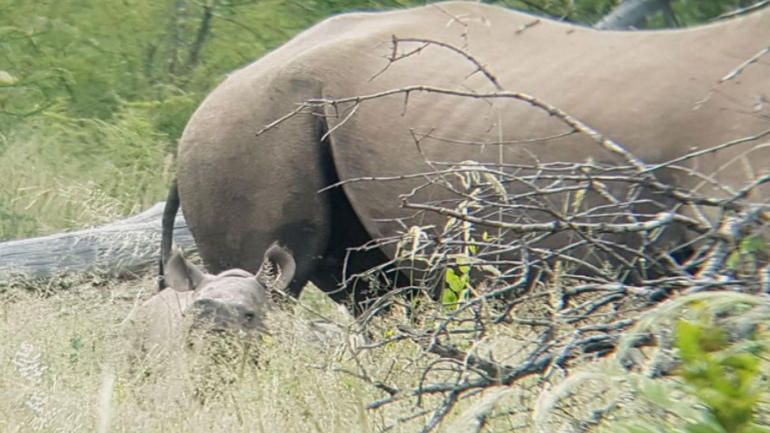 Cheney vows to fight on, but her ouster signals Trump's hold...

School walkouts unfolding across the country

Inside the memorial to victims of lynching